The Resistor - How Voltage Drops

Resistors, capacitors and inductors are the basic passive elements of any electric circuit. Find out why resistors are so important, how we may describe and characterize them and what materials they are made off!

A resistor is a passive element of an electric circuit that resists the flow of electrical current. If a certain potential difference \(U\) is applied, a current \(I\) emerges following Ohm's law,

In the following we will get to know resistors a little better. We will outline resistor applications, a somewhat rigogous electromagnetic description of resistors, how resistors are characterized and what materials are used for their construction. We wish you an interesting read! However, if you think, something is urgently missing, please let us know! Worksheets on electrical circuits can be found here.

Before we get into details on how we can understand a resistor, let us briefly look into its applications. There are much more than one thinks of in the first place:

Most common to us is the supply of a specific current or voltage for other electrical components and the division of voltage and currents in a needed proportion with serial and parallel resistors.

A so-called pull-up resistor is used to connect a signal line like a logic circuit to a much higher voltage. Such resistors have a very high resistance in the kΩ range and ensure that no output with a certain impedance can influence the potential of the signal line itself. Pull-down resistors are used to connect a signal lines to the ground to hold the line at approximately zero potential if no actual signal is present. These resistors are also highly ohmic to prevent leakage currents.

Interesting applications can be found if one considers the change of a resistor's resistance when some physical quantity is changed. Then, one can build sensors to measure i.e. the temperature, luminance or pressure.

Last but not least, resistors are also used to transform electrical energy into heat like in soldering irons or heaters.  Light bulbs work likewise: they emit electromagnetic radiation by a heated metal according to Planck's law.

Resistors can be understood from a phenomenologic point of view introducing current and voltage as it is done in schools. Here, we want to use our well-known field equations and Ohm's law to find the well-known equations for the ohmic resistance, specific resistance and the dissipated power.

What is Ohmic Resistance?

where the area \(A\) can be anywhere separating the points 1 and 2 but must contain all of \(\mathbf{j}\left(\mathbf{r}\right)\). For now, we just have that the resistance \(R\) using Ohm's law is given by

At this point we want to shortly outline how we come to the power dissipated by a resistor, the famous \(P=R\, I^{2}\). Strictly, we would have to use Poynting's theorem and derive at the loss term \(\mathbf{j}\left(\mathbf{r}\right)\cdot\mathbf{E}\left(\mathbf{r}\right)\) directly from there. Such an approach requires the actual knowledge of the whole Maxwell equations. Let us find the dissipation here a little more intuitive.

Let us start with the infinitesimal work needed to move a charge q a certain distance in an electric field,

Per time intervall, we find for this work

Furthermore, if the current density is constant over the cross section of the resistor, we can express the dissipated power as an integral over the electric field and recover a well-known expression:

Ohm's law allows us now to reformulate the power in other familiar expressions:

Now that we have learned how to boil down Maxwell's equations to get well-known expressions, let us discuss the common ways to characterize a resistor.

In addition to material and geometry properties, there may exist a plethoria of different categories to distinguish resistors. For instance, resistors with a fixed and variable value exist or ones for which the material's temperature dependency can be parametrized. A temperature characterization is often done in terms of the temperature coefficient \(\alpha=\rho d\rho\left(T_{0}\right)/dT\) assuming a linear dependency such that \(\rho\left(T\right)=\rho\left(T_{0}\right)\left\{ 1+\alpha\left(T-T_{0}\right)\right\}\). Now let us come the main characterization methods.

Resistors are made of different materials with largely varying properties. Even though the boundaries are somewhat continuous, one may find four different types of resistor depending on their specific resistance:

In principle, any material category, except the superconductors, may be used for a resistor since not only the specific resistance but also geometrical parameters influence its overall resistance.

Most of the resistors have a non-changing cross-section in common. This is useful since it implies that the whole resistor can be characterized only by length and cross section area as we have seen before. 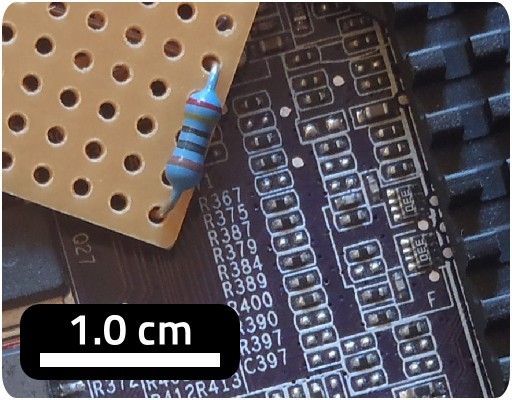 Resistors with wire leads for through-hole mounting are often of cylindrical cross-section. A surface-mounted resistor on the other hand has most likely a squared, see figure on the right. The form is dictated by cost efficiency of the resistor and final device fabrication processes/requirements.

For all forms, we can sub-divide resistors into those using films, a bulk material or windings. A film here refers to a thin layer, i.e. of carbon wrapped around some isolator whereas the bulk material has a much thicker cross-section. The winding is basically a way to reduce the space requirement of a bulk material resistor like a metallic wire which is often used. The different forms just minimize or maximize the cross-section area or length of a resistor - a very effective way to control its properties by design!

For varying purposes, different materials in resistors can be found. Most frequently, carbon, metal/metal oxide films are used. The choice of the material hugely depends on the maximum power consumption, and, of course, material cost. Let us outline the most common materials here.

For a power consumption lower than ~5 W, carbon is the material of choice. It is cheap and relatively easy to process in industrial fabrications - carbon resistors can be printed directly onto circuit boards mounted on or surrounded by a ceramic isolation. We can find such kinds of resistors for example on any motherboard, i.e. surrounding more complex chips. Note that small capacitors look very similar. In most cases, however, we may distinguish the two by a label, like “C64” and “R92” for the 64'th capacitor and 92'nd resistor, as you can see again on the figure above.

For higher power consumptions, metal film or metal oxide resistors are commonly used like the ones you use for home-made circuits. Aluminium oxide, Al2O3, is the most common material here for two reasons. It has an enourmous specific resistance of \(\rho_{\text{Al}_{2}\text{O}_{3}}\approx10^{{\color{red}{12}}}\,\Omega\text{m}\) and is contained in a lot of minerals which add up to 15% of the earth's crust!

High-temperatures-resistors are usually made of sophisticated composite matertials containing ceramic and metal - so called cermets.

Very interesting objects we already outlined are photoresistors: If we illuminate such a device, electrons are excited into the conduction band by the inner photoelectric effect. This lowers the resistance of photoresistors in a very deterministic way. Such devices can be used as very accurate light detectors. Most used materials for visible light are the semiconductors cadmium sulfide, CdS, and cacmium selenide, CdSe.

As for all industrial devices, producing a resistor is a science in itself involving physical, chemical and sometimes even biological processes.

If you liked this article, maybe you would like to more e.g. about the disadvantages of solar energy. Thank you for reading!