Devices composed of qubits and a suitably designed nanoantenna might be used for quantum computation. They should not only be much faster than any known implementation but also extremely small.

The fundamental concept behind quantum computation is the use of a number of quantum systems that are coupled to perform calculations as a collective. Usually, only a few so-called quantum bits (qubits) are used. Experimentally demonstrated realizations include laser-based lattices with trapped atoms, or even Cooper pairs in superconducting circuits. The mutual coupling strength of the qubits fundamentally fixes the time scales on which a quantum computer can perform operations: a small coupling strength allows only a slow exchange of energy and thus slow information processing whereas a large coupling strength leads to a rapid computation. To build ultra-fast quantum computers, strong couplings between the involved qubits are required.

Wallraff and co-workers have demonstrated in 2004 how to reach the so-called strong coupling regime between a qubit and a cavity [1]. The investigated system, a superconducting resonator coupled to a Cooper pair box qubit, operating at GHz frequencies, i.e. at about 109 cycles per second. Technology, however, has made a great leap forward since the groundbreaking work of Wallraff: the deterministic fabrication of nanoscale structures made it possible to couple, for instance, Nitrogen Vacancy Centers to a cavity - at optical frequencies [2]. The achieved coupling strength in Ref. [2] was realized with a photonic crystal as the cavity. Such an approach is suitable if miniaturization is not an urgent condition; photonic crystals obey sizes in the order of at least a few micron. A naturally arising question is if a qubit cannot be strongly coupled to a much smaller cavity as it would be required by highly integrated chip technology.

This development is not surprising: Light-matter interactions enforced by nanoantennas have influenced the physical sciences to a great extent. Groundbreaking experiments have revealed the unprecedented potential of these devices. In their usual setup, nanoantennas can be either operated as receivers or emitters. Used as emitters, it has been demonstrated how nanoantennas can drastically alter the emission rate and direction of close-by quantum systems [4]. As receivers, such antennas can enhance the absorption of molecules in their vicinity by orders of magnitude [5].

But the utilization of nanoantennas is not limited to act as emitter or receiver. It was theoretically suggested that if a quantum system like a qubit is placed in the feed of a nanoantenna, the localization of energy to tiny volumes can lead to a strong coupling of the quantum system to the nanoantenna [6]. In such a setup, the nanoantenna acts as an active part of the system, not only as energy transmitter. Gonzalez-Tudela and co-workers went a step further and discussed the use of the coupling of nanostructures to qubits and how this coupling changes the physical properties of the overall system [7]. 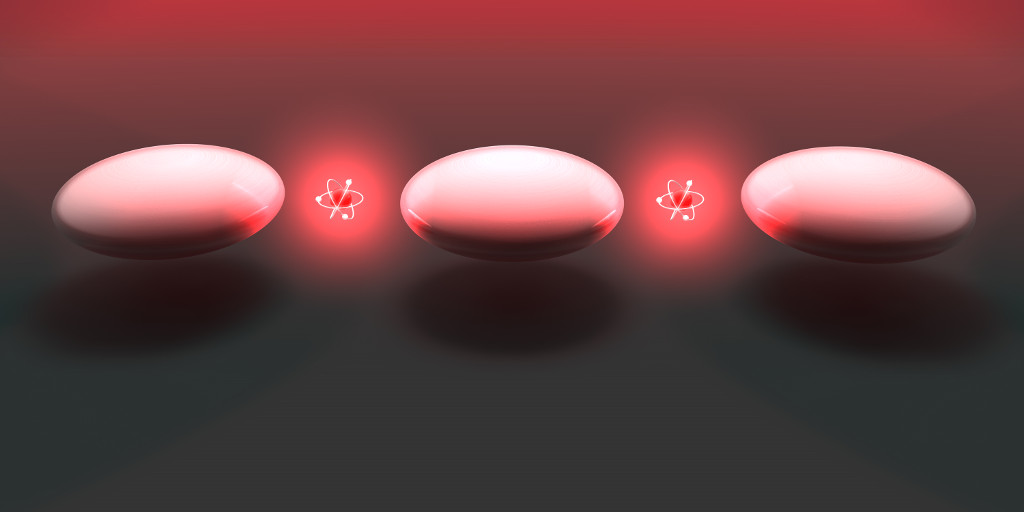 Two qubits placed in the feed gaps a a suitably designed nanoantenna. Such a setup may provide ultra-fast qubit computation due to a strong coupling of the qubits to the nanoantenna (artistic impression by Karsten Verch).

The ideas of nanoantennas strongly coupled to qubits and their ultimate use to mediate an ultra-fast interaction between them have been combined by Słowik et al.: A vizualization of a possible geometry is shown above, where two qubits are placed inside the two feed gaps of a nanoantenna which leads to strong coupling. Consequently, the mutual interaction between the qubits drastically increases and happens on extremely short time scales. Instead of nanoseconds (10-9s), a complete flip between the qubits may just need picoseconds (10-12s), corresponding to a computation frequency in the THz regime. Such an enhanced interaction leads to a speedup of three orders of magnitude compared to state-of-the-art quantum computations!

As it is outlined by Słowik et al., the design of the nanoantenna as the qubit-qubit mediator is crucial for an efficient functionality. If the antennas are chosen very small, the coupling increases but overwhelming losses might render the combined system useless: only every tenth or so excitation of a qubit may be used for computation and can be detected from the device. Bigger nanoantennas generally obey a much better efficiency but have a somewhat lower coupling strength which would result in longer albeit still extremely fast computation times. The trade-off between efficiency and speed has to be considered if the suggested ideas are realized in experiments and products in the future.

From Theory to Experiment and Application?!

We have seen that nanoantennas can not only be used to mediate the interaction between light in the macroscopic and the nanoscopic world but also to mediate ultra-fast interactions between qubits. The outlined approach has the potential to realize ultra-fast quantum computations on surfaces as small as a few hundred nm². The feasibility of the investigated devices hugely relies on a proper design of the nanoantenna and a precise placement of the qubits. To achieve both goals at the same time appears to be extremely challenging but not impossible. As we have recently discussed recently discussed, nanostructures and especially gaps in-between them can be produced with nanometer precision. The precise placement of quantum dots that could be used as qubits has been demonstrated as well [8].

In summary, we may be confident that the suggested concept of strongly coupled qubits using nanoantennas will be experimentally shown soon. The introduced scheme provides a new and lucrative direction in ultra-fast quantum computation and promises next-generation nanoscale devices for astonishing applications.

Thank you very much for reading! Please feel free to comment about the discussed concept below the article. You may also consider sharing it with your family, friends and colleagues below the references. If you want to read more about couplings in physical systems, the worksheet "Detuning in Coupled Oscillatory Circuits" might be helpful. Furthermore, in the article "Nanoantennas to Control Quantum Systems", a general overview about nanoantennas and their potential to interact with quantum systems is given.

About the author: Robert Filter is a physicist and nanoantenna enthusiast. He has authored a number of papers on nanoantennas and believes that they are the next big thing. They show rich physics and offer a variety of possibilities for applications.