Richard Feynman gave a remarkable talk at Caltech in 1959 called There’s Plenty of Room at the Bottom. In his contribution, Feynman formulated a noble challenge:
"But I am not afraid to consider the final question as to whether, ultimately - in the great future - we can arrange the atoms the way we want; the very atoms, all the way down!"
I think we have reached that goal!

We are now able to arrange quantum systems like nitrogen-vacency centers or quantum dots with nanometer precision and fabricate extremely diverse structures on that scale! This is nice but what are the benifits, the new possibilities of such arranged quantum systems? Feynman thoughts were:

When we get to the very, very small world [...] we have a lot of new things that would happen that represent completely new opportunities for design. Atoms on a small scale behave like nothing on a large scale, for they satisfy the laws of quantum mechanics. So, as we go down and fiddle around with the atoms down there, we are working with different laws, and we can expect to do different things.

We have seen tremendous achievements over the last couple of years opening up entirely new possibilities for the interaction of light with quantum systems. Let us find out how nanoantennas can be used to achieve what Mark Raizen uses to call Feynman’s dream!

In order to challenge our understanding of quantum mechanics on the nanoscale, we have to first think of suitably accessing such systems with electromagnetic radiation. There are a couple of different devices that allow us to do so, see below:

The special properties of these devices let us change for example the spontaneous emission rates of quantum systems which is called Purcell effect. Yes, this rate is by no means a constant but merely comes from an enforced self-interaction of the quantum system! In addition, one would really like to have a very strong interaction to an external electromagnetic field. However, the first three presented examples are very large with respect to quantum systems - several micrometer to say the least. These “large” devices may not provide what is needed to achieve it: highly localized modes associated with huge field enhancements. Here, nanoantennas come into play: As we have seen in "A Dielectric Sphere in a Homogeneous Electric Field", a small metallic sphere can provide a very strong nearfield in resonance weakened only by absorption of the material. This behaviour is characteristic for systems where collective electron oscillations inside a metallic object are responsible for its electromagnetic properties. Such a collective excitation is called surface plasmon polariton - the light-electron interaction forms a new quasiparticle. The electron oscillations are very strong at the boundary of the metallic object. This results in an extremely strong electric field in a small volume. In that volume, the desired strong interactions to quantum systems are possible.

The behaviour of plasmonic nanoantennas is different compared to usual radio-frequency antenna theory and have to be understood in terms of plasmonic modes. For radio frequencies, metals are perfect conductors which implies antenna sizes in the order of the wavelength. Consider for example two metallic spheres in close proximity as a plasmonic nanoantenna. This structure may be resonant at wavelengths around 500nm even if the spheres itself are extremely small - say 20nm in diameter each! For this antenna, the strongest electric fields are in-between the spheres. As in antenna theory, it is natural to call this region the “feed of the antenna”. Nevertheless, our receivers and emitters, will not be mobile phones or televisions, they will be molecules!

Nanoantennas - from Theory to Experiment

We have seen that the basic concept to use nanoantennas is very simple and appealing - provide a quantum system with energy on the nanoscale and adjust its emission properties. It was only a matter of time until pioneering experimental research was conducted. In 2005, Mühlschlegel et al. were successful to fabricate golden nanoantennas resonant at wavelengths of visible light. This proof-of-principle experiment inspired a lot of scientists to investigate the unique possibilities of nanoantennas, especially when coupled to quantum systems. 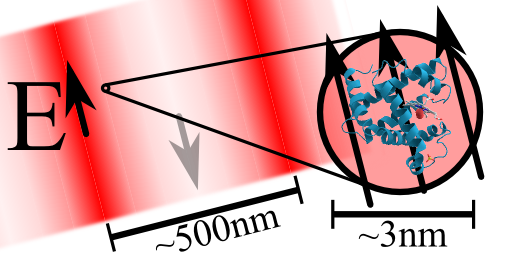 For example, the Weisskopf-Wigner theory for the enhancement of spontaneous emission rates was verified for nanoantennas by the group of Lukas Novotny and co-workers in 2006. Another spectacular application was given In 2010 by the group of Niek van Hulst: Yagi-Uda nanoantennas could be shown to direct the emission of quantum systems placed at the feed of the antenna. Now these are just a few of the many studies including applications in sensor devices, light sources, telecommunication, integrated nanocircuits, solar panels, … A nice recent review by Bert Hecht and co-workers gives a very decent overview of the field for further reading.

Despite all this progress we have seen, nanoantenna research is still a vastly unexplored topic. The main question is: What can we do now that was impossible before? For example, let us question so-called forbidden transitions. Molecules are usually much smaller than the wavelength of visible light, see figure on the right. So we might very well assume that the light’s electric field is constant over the entire molecule. This is called the electric dipole approximation. However, if light-matter-interactions can only be of dipolar nature, this is a severe limitation! Now, can we enable higher-order interactions using nanoantennas?

If we illuminate two closely placed metallic spheres with a laser, we find that the electric field is strongly varying inside the gap of that nanoantenna. So, higher order non-dipole interactions can be hugely enhanced and we can overcome the electric dipole approximation! Utilizing nanoantennas to enable “dipole-forbidden transitions” opens up entirely new possibilites for light-matter-interactions such as the emission of light at lower frequencies (luminescence), see figure on the left.

We can clearly see that nanoantennas alter our understanding of light-matter interactions drastically. Maybe you can find a limitation that can be made obsolete! 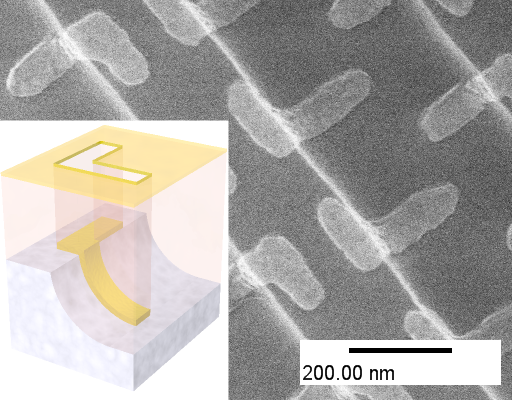 Aside from the very nice perspectives for research, what about industrial applications for nanoantennas? Here, the most important requirement is a fast and accurate fabrication process. And there is very good news: amazing progress has been made in this area as well. A recent example is the so-called on-edge lithography: Dietrich et al. were able to show the production of nanoantennas at a remarkable speed of several mm² per minute. Most importantly, the samples are highly reproducible on the nanometer scale, see figure on the right.

The Future is Bright

As we have seen, nanoantennas are a very nice tool to lift limitations and to study quantum systems on an entirely new level. Especially the possibility to access quantum systems in the visible spectrum will result in amazing new possibilities and applications using highly sophisticated fabrication technologies. I am sure that Feynman would be very pleased with these developments. Maybe he was dreaming of nanoantennas!

About the author: Robert Filter is a researcher at the Abbe Center of Photonics, Jena, Germany. Robert has written a number of papers on nanoantennas and is glad to write on problemsinelectrodynamics.com! If you like the site and would like to share some of your knowledge on electrodynamics, please do not hesitate to contribute!