Ever since the discovery of graphene and the well deserved Nobel prize for Geim and Novoselov in 2010, one of the main questions was how we may be able to transfer graphene's remarkable properties into applications. One of the approaches relies in the use of graphene as a plasmonic material: the newly arising field of graphene plasmonics tries to combine the features of plasmonics, i.e. strong electric field localization and enhancement with graphene's tunability and low losses.

As we have seen earlier, plasmonic nanoantennas may be used to realize effects that were impossible before, for example to allow forbidden transitions. Using graphene, we can naturally expect even more amazing applications that are simply not possible with conventional metallic structures.

Schematically, the process works as follows. The molecule is placed inside the feed of the carefully designed graphene antenna. This may happen by an atomic force microscope in an experiment or by a microfluidic channel in an actual device. The molecule is then transferred into an excited state by absorption of a photon in the visible or near ultraviolet frequency range.

Now, the graphene antenna is tuned to a specific resonance frequency of the molecule - just like a radio - using a certain gate voltage. Coronene can now lose energy very easily through this transition whereas other transitions are barely affected. Technically, the radiation rates of coronene are changed which is often called Purcell effect. Now, internal redistribution processes occur between different states of coronene.

These redistributions are much faster than any radiation relaxaion of the states itself. This leads to the following effect: If one of the states in the “redistribution chain” loses energy much faster than the others, the molecule will mainly emit light at that specific frequency, the tuned frequency of the graphene antenna. The authors call the entire process consequentially selective emission. 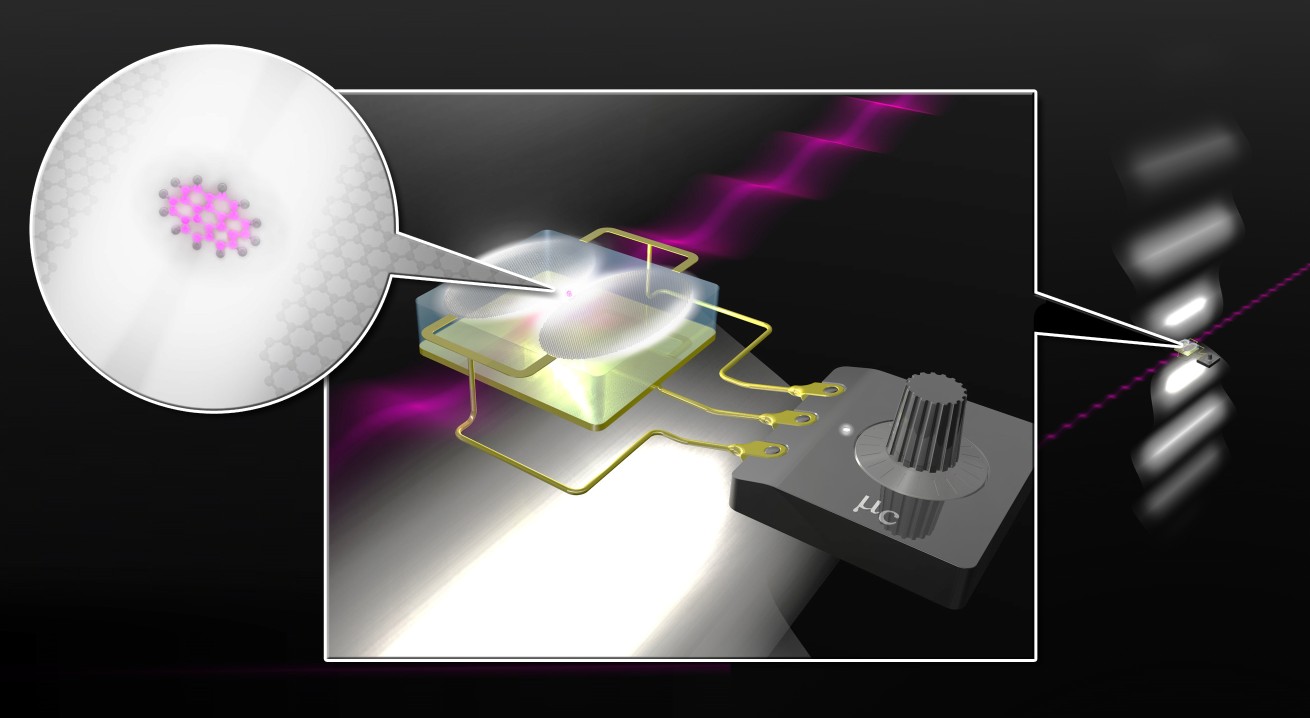 We may ask if the predicted selective enhancement of coronene emissions is a special behavior of the very molecule. The authors claim that this is not the case since the emission properties of corenene are just an application of the fundamental genereralized Planck's radiation law for luminescence.

This is a very important aspect since such devices would be tremendously useful for spectroscopy: all THz transitions of potentially a huge class of molecules could be identified using just a single device! This would simplify the identification of these molecules to a great extent. Furthermore, the suggested graphene antenna is only roughly 1µm². Such a small dimension makes the device potentially the world's smallest spectrometer. The authors hope that the study will give graphene plasmonics a new perspective to implement functional devices that make use of the unique properties of this fascinating two-dimensional material.